Continuous Communication – What to consider before you start, during and when closing each initiative

Open and clear communication is often a key success factor in the execution and delivery of projects of all sizes. Yet, we not always give it the attention it deserves. The guidelines below are particularly useful in raising communication awareness with newer team members when taking up new assignments or projects. 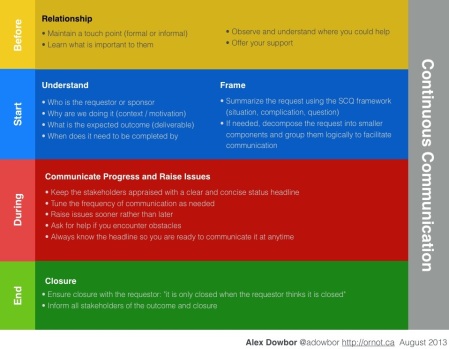 Technology needs to be implemented right

Excerpt from an Accenture presentation on Cloud Computing.

Interesting use of a picture to get the point across. The picture is actually from Sierra Leone’s swimmer Gibrilla Bamba, who had his goggles fall off during the men’s 50 meter breaststroke. See BBC news (picture 7) or more here.

My opinion on the use of acronyms is that they should be avoided unless they are essential.

Some acronyms convey more meaning than their non abbreviated format and should be used: IBM, NASA, AIDS and HTML are good examples. They are widely understood and using them advances the communication.

Other acronyms are industry specific and are not widely known outside of that context. In this category there some acronyms are very common and others are not so well known. In the IT industry for example, the following are commonly used but not everyone (including IT folks) may know what they are: CRM, ERP, MDM, SOA, BI, RUP, SOAP, BPA, I&O, GAC, etc.

These acronyms will add value in many cases, but it’s important to make them explicit by writing them in full as well. This will also reduce acronym ambiguity, as even within a single industry there are different meanings for the same acronym. Ask a software developer what GC is s/he will tell you that it’s the Garbage Collector but ask an infrastructure specialist and s/he will say GC stands most definitely for the Global Catalog.

On a category on their own are the company specific and made up on the fly acronyms, like some of the ones listed above. With rare exceptions these should be strongly avoided as they create jargon that doesn’t help companies communicate with their clients nor internally.

The way by which a group of people decide to communicative amongst themselves and with others says a lot about their culture. I believe that the abuse of acronyms promotes a culture that is opaque and closed – where openness and clarity are not at the forefront.